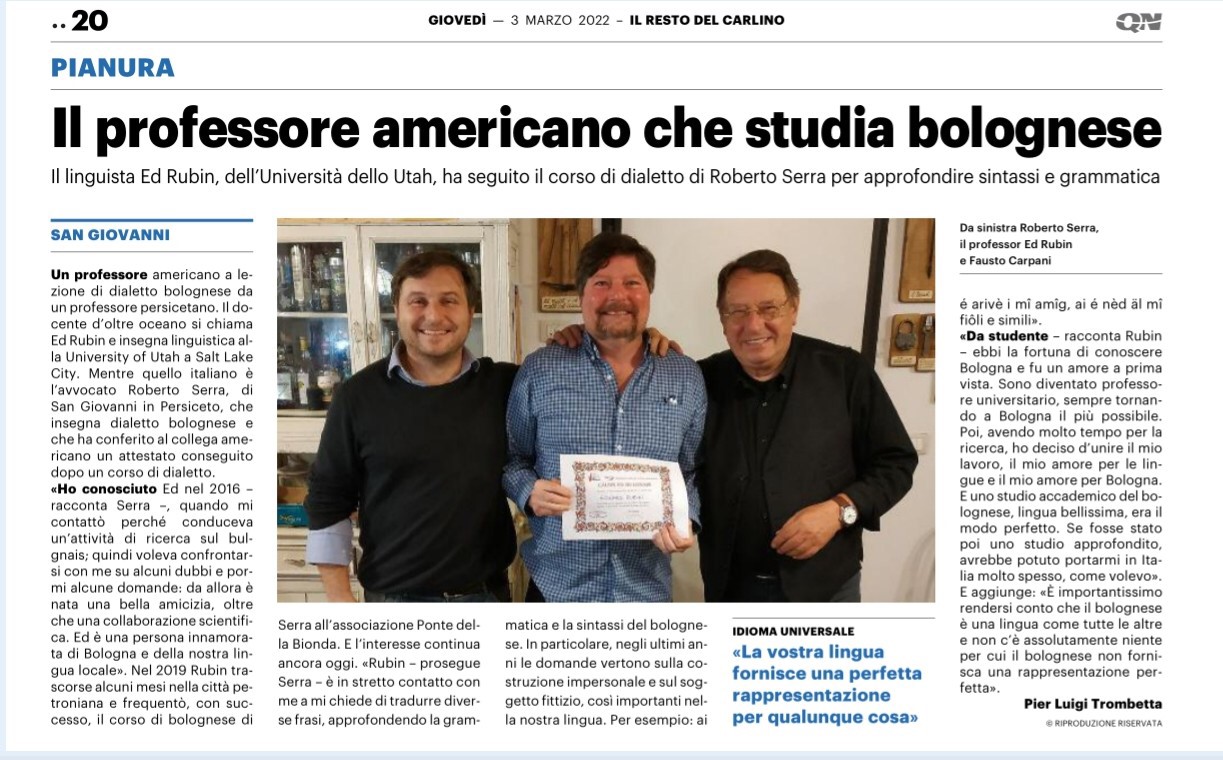 An American professor in a Bolognese dialect lesson with a Persicetan professor. The overseas lecturer is called Ed Rubin and he teaches linguistics at the University of Utah in Salt Lake City. While the Italian is the lawyer Roberto Serra, from San Giovanni in Persiceto, who teaches Bolognese dialect and who has awarded his American colleague a certificate obtained after a dialect course. "I met Ed in 2016 - says Serra -, when he contacted me because he was conducting a research activity on bulgnais; therefore he wanted to discuss some doubts with me and ask me some questions: since then a beautiful friendship was born, as well as a scientific collaboration . And he is a person in love with Bologna and our local language ". In 2019 Rubin spent a few months in the Petronian city and successfully attended the Bolognese course in Serra at the Ponte della Bionda association. And the interest continues today. "Rubin - continues Serra - is in close contact with me and asks me to translate several sentences, deepening the grammar and syntax of Bolognese. In particular, in recent years the questions have been about the impersonal construction and the fictitious subject, so important in our language. For example: ai é arivè i mî amîg, ai é nèd äl mî fiôli and the like ". "As a student - says Rubin - I was lucky enough to know Bologna and it was love at first sight. I became a university professor, always returning to Bologna as much as possible. Then, having a lot of time for research, I decided to join my work, my love for languages ​​and my love for Bologna. And an academic study of Bolognese, a beautiful language, it was the perfect way. If it had been an in-depth study, he could have taken me to Italy very often, as I wanted. "And he adds:   "It is very important to realize that Bolognese is a language like any other and there is absolutely nothing for which Bolognese does not provide a perfect representation"

"Your language provides a perfect representation for everything."